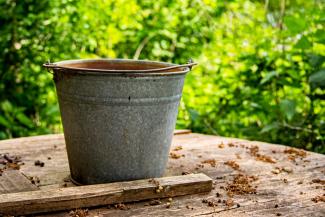 When It Rains Gold, Reach For A Bucket

“Every decade or so, dark clouds will fill the economic skies, and they will briefly rain gold. When downpours of that sort occur, reach for a bucket.” —Warren Buffett

The battle with COVID-19 rages on, and the headlines continue to get worse. The number of new cases and deaths continues to grow. Individuals and companies are hurting, with even an iconic company like The Cheesecake Factory telling landlords they won’t be able to make their rent payments for April. This current situation is a human crisis, and there is no way to put a value on the lives that have been lost. However, we will get past this pandemic, as we’ve gotten past every other crisis, and we will see better times in the future. As Warren Buffett stated, when clouds are dark, that could spell opportunity for longer-term investors.

We’re already seeing some good news on the horizon. The number of new cases may have peaked in Spain and Italy, the epicenter of the outbreak in Europe. Here at home, new cases may begin to slow within the next few weeks, while Seattle, one of the first major cities in the United States to have an outbreak, has reached its peak of new cases. Corporate America is seeing major breakthroughs as well, as Johnson & Johnson announced human testing on its COVID-19 treatment should start by September, and a vaccine may be ready by early next year.

While we wait for containment measures to take effect and for an ultimate cure, the immediate impact to the economy has been devastating. More than 3.2 million people applied for unemployment benefits last week, more than five times the previous record, while US gross domestic product (GDP) is expected to take a historic dive. Remember, the economy can stop by either pumping the brakes or hitting a tree. Our economy has hit a tree, and the short- and long-term impacts of this abrupt halt could be felt for a long time to come.

The double-barreled support from the Federal Reserve (Fed) and Washington’s recent $2 trillion fiscal stimulus plan (CARES Act) won’t fix the root of the problem—only doctors and scientists can—but it may help the economy restart more quickly once the pandemic subsides. Fed Chair Jerome Powell noted we very well may be in a recession, but this isn’t a typical recession, as our economy started from a strong position. The $2 trillion CARES Act, totaling more than 9.3% of GDP, provided an additional boost. For reference, the 2008 fiscal stimulus plan was 5.5% of GDP, showing just how much larger this plan is than anything else we’ve ever seen. These measures may be viewed as a bridge for consumers and small businesses to help them get to the other side, and so businesses are positioned to take full advantage when the economy restarts. The combined monetary and fiscal policy action may be the catalyst to propel a historic bounce back for our economy over the second half of this year.

World War I took more than 15 million lives, only to be followed by the pandemic of 1918, which claimed another 50 million. Very few would have expected to see the boom in technological development, economic growth, and the stock market that followed during the “Roaring ‘20s.” It is always darkest right before the dawn, and our resolve and determination will once again shine through. Longer-term investors may want to consider looking for opportunities to invest in an eventual market recovery, as stocks are in the zone where adding to equity exposure could be quite beneficial. Or as Warren Buffett would say, they better get their buckets ready.

Please stay healthy, and contact me if you have any questions or concerns.