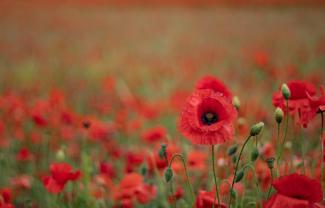 Every Memorial Day, we reflect on the heroism, bravery, and sacrifice shown by the men and women who gave their lives for our country. We visit their grave sites. We read books about them. We talk about them. We hear speeches about them. But however we commemorate the day, we do our best to remember all those who helped create, maintain, and defend our nation.

Of all such commemorations, the one Abraham Lincoln gave on a bright morning back in November, 1863 stands to me as the finest. I’m referring, of course, to the Gettysburg Address.

There was no such thing as Memorial Day back then, and indeed, when we think of the Gettysburg Address nowadays, it’s mostly to help schoolchildren memorize it word for word. But if you actually read the words, if you actually ponder what they mean, you’ll realize there’s never been a greater tribute to all those died while serving our country.

Here is what Lincoln said:

Four score and seven years ago our fathers brought forth on this continent a new nation, conceived in liberty, and dedicated to the proposition that all men are created equal.

Now we are engaged in a great civil war, testing whether that nation, or any nation so conceived and so dedicated, can long endure. We are met on a great battlefield of that war. We have come to dedicate a portion of that field as a final resting place for those who here gave their lives that that nation might live. It is altogether fitting and proper that we should do this.

But, in a larger sense, we can not dedicate, we can not consecrate, we can not hallow this ground. The brave men, living and dead, who struggled here, have consecrated it, far above our poor power to add or detract. The world will little note, nor long remember what we say here, but it can never forget what they did here. It is for us the living, rather, to be dedicated here to the unfinished work which they who fought here have thus far so nobly advanced. It is rather for us to be here dedicated to the great task remaining before us—that from these honored

dead we take increased devotion to that cause for which they gave the last full measure of devotion—that we here highly resolve that these dead shall not have died in vain—that this nation, under God, shall have a new birth of freedom—and that government of the people, by the people, for the people, shall not perish from the earth.

As you can see, I have bolded certain lines that I feel most apply to Memorial Day. Reading his speech now, over 150 years later, I’m amazed at how simply and well Lincoln captured the meaning of Memorial Day. The men and women who fought and fell at Bunker Hill, or Gettysburg, or Cantigny, Okinawa, Ia Drang, or Fallujah, truly did give their lives that our nation might live. For that reason, nothing we do or say can sanctify their actions more than they themselves have already done. While Lincoln underestimated the lasting power of his own words, he was correct when he said the world will little remember the things we say ... but the things they did will never be forgotten.

Something else in Lincoln’s speech stands out to me. It is for us the living to be dedicated to the unfinished work that they began. When I think of all our nation’s heroes died for—freedom and liberty, union and equality, independence and security—I realize that our country is still very much a work in progress. The rights we as Americans hold dear must be constantly protected and advanced. The men and women we remember every Memorial Day didn’t give their lives thinking our nation’s issues would be settled forever. They died knowing there would be others after them to continue the fight.

And who are those “others”? They’re us.

So this Memorial Day, every Memorial Day, I will ask myself: how have I dedicated myself to the work? What have I done to ensure they did not die in vain? What can I yet do?

It’s the best way I know to see that government of the people, by the people, and for the people, shall never perish from the earth.

However you commemorate the occasion, may Memorial Day be everything you want it to be.