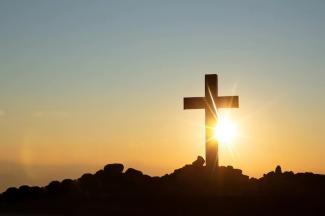 In our secularized western culture, Easter is thought of by many only in terms like – Spring Break, the Easter Bunny or Easter Egg Hunts.  For Christ followers it is so much more. On Easter, we celebrate the resurrection of Jesus Christ, following his horrific death which included a humiliating trial, a brutal beating and horror of crucifixion. The importance of Easter for Christ followers is seen in that it is the most well-attended church service of the year.

What vital events in the life of Christ and God’s Story do we recognize and celebrate with Easter? According to God’s Word, Jesus Christ is the promised Messiah and Savior of the World. (Isaiah 51). The resurrection, Jesus being raised from the dead three days after his death on the cross, is the central element in the Easter Story. When Jesus laid down his life on the cross, he paid the full penalty for our sin by offering the perfect, spotless sacrifice. And, subsequently, by raising from the dead, the Lord defeated the power of sin and death and purchased, for all who believe in him, eternal life.

Such an important story requires some build up. The Easter Season begins with Lent, a 40-day period of fasting and spiritual discipline in preparation for Easter. Ash Wednesday marks the start of Lent. The week preceding Easter is called Holy Week. Holy Week begins with Palm Sunday, the celebration of Jesus Christ's triumphal entry into Jerusalem. Maundy Thursday is the remembrance of the Last Supper when Jesus shared the Passover meal with his disciples. Jesus’ death by crucifixion is commemorated on Good Friday. That title has perplexed many, thinking it should be called ‘horrible Friday’ – the day our precious Jesus was brutally beaten and killed. Jesus death was anything but a surprise to God and for Christ followers it is a ‘good day’ because on that day Jesus took on all of our sins.

The Apostle Paul, seeking to explain the events of Easter Week to new believers in Corinth, Greece several decades later, used these words – ‘For I delivered to you as of first importance what I also received: that Christ died for our sins in accordance with the Scriptures, that he was buried, that he was raised on the third day in accordance with the Scriptures, and that he appeared to Cephas, then to the twelve. Then he appeared to more than five hundred brothers at one time, most of whom are still alive, though some have fallen asleep. Then he appeared to James, then to all the apostles. Last of all, as to one untimely born, he appeared also to me.’ - 1 Corinthians 15:3–8

From all of us here at Dove Investments, we invite you to join us in celebrating that great truth of the faith triumphantly declared on Easter – ‘He has Risen, He has Risen Indeed!’